In foreign policy Belarus places stake on openness and constructiveness, fidelity to principles and flexibility. The country proved its ability to establish a mutually beneficial dialogue and respond to modern challenges, which include human trafficking and protection of human rights. 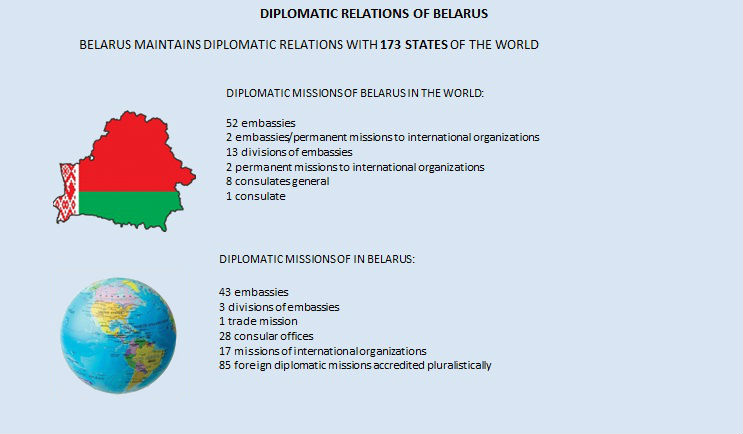 The Republic of Belarus implements about 3.500 international treaties, including over 1.900 – bilateral and about 1.500 – multilateral treaties.

The strategic ally and the major trading partner of Belarus is, of course, the Russian Federation. The relations between the two countries are based on historical kinship of the nations, mutual political interests, complementarity of the economies and close cooperation ties between enterprises. 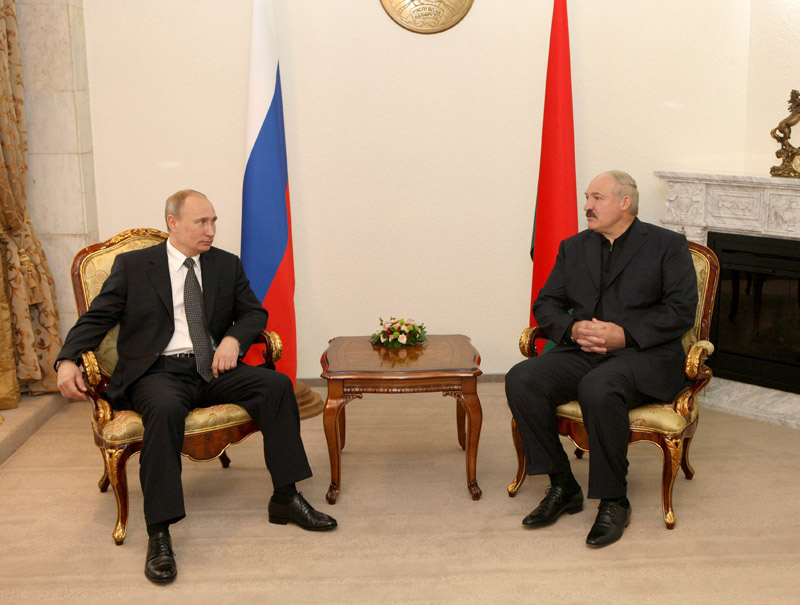 Over the past 5 years the commodity turnover between Belarus and Russia increased by 1,5 times and reached USD 39,4 billion in 2011.

The development of bilateral relations with the CIS countries is also one of the main foreign political and economic priorities of the Republic of Belarus.

The Republic of Belarus is establishing equitable, respectful and pragmatic relations with the European Union, taking into account the mutual interest in creating more favorable conditions for trade and investment interaction.

The progressive development of constructive relations with the EU promotes the consolidation of cross-border ties, joint illegal migration, human trafficking and organized crime combating, the development of strategic transit.

As a member of the EU initiative “Eastern Partnership”, Belarus is in favor of increasing equitable and meaningful cooperation and its saturation with particular economically significant projects.

Stable positive dynamics are observed in trade between Belarus and Europe. Starting from 2000, Belarusian export to the EU increased by more than 20 times. In 2012 the share of the EU in the total export from Belarus amounted to 39%. The ten major trade partners in terms of sales volume among EU member states are such countries as the Netherlands, Germany, Latvia, Poland, Italy, Lithuania and the United Kingdom.

Following the results of the first half of 2012, the share of Belarusian export to the EU amounted to 45,6% in the total export volume of Belarus.

Countries of Asia, Africa and the Middle East

The Asian-African vector is one of the most promising aspects of the foreign policy of Belarus. Its potential is based on the harmony of positions in regard to current international issues, the real agreements and open sympathies in respect of the Republic of Belarus. 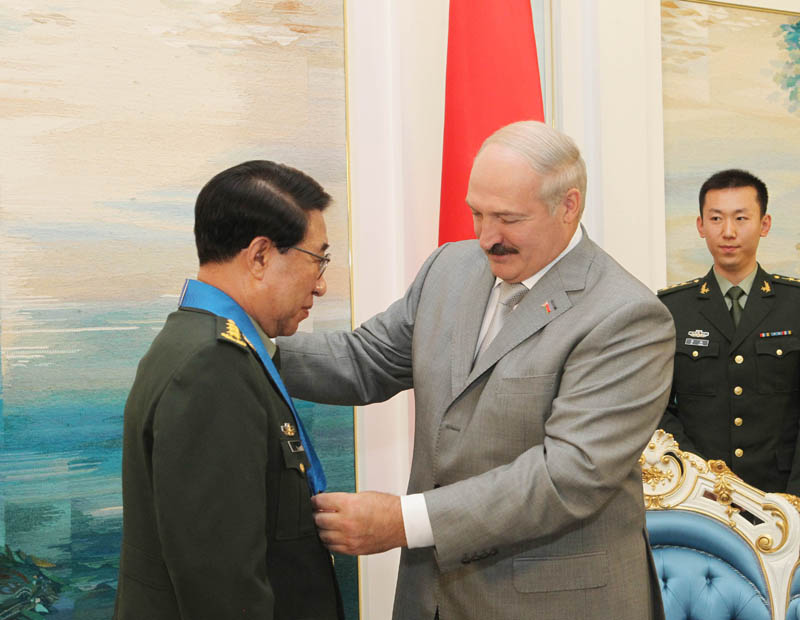 In recent years the relationships with partners, forming support arches of the Belarusian foreign policy in countries of Asia, Africa and the Middle East became much stronger. Effective contacts at the highest and supreme levels with China, Iran, Vietnam, Syria, Qatar, Egypt, UAE, Oman and RSA, which secured the agreement on the implementation of specific projects, are continued.

China is one of the high priority partner countries in this direction. The Belarusian-Chinese political dialogue, which reached the level of strategic cooperation, maintains its intensity and is conducted in a spirit of friendship and true confidence. Large-scale economic and trade cooperation is carried out, investment projects worth millions of dollars appeared.

The opening of two new Belarusian embassies — in Indonesia and Nigeria — in 2011 became convincing evidence of the aspiration of our state to actively expand mutually beneficial cooperation with the countries of Asia and Africa.

In order to diversify the strategic aspects of foreign policy, Belarus is actively developing cooperation with the countries of Latin America. For Belarus this region is one of the most important areas of integration into world trade and economic ties. Latin American countries are of interest for the Belarusian enterprises as a capacious and rapidly growing market. In 2011 the total commodity turnover between Belarus and the countries of Latin America reached USD 3,5 billion and had a balanced character (the export of Belarusian goods exceeded USD 1,74 billion, import amounted to about USD 1,76 billion). 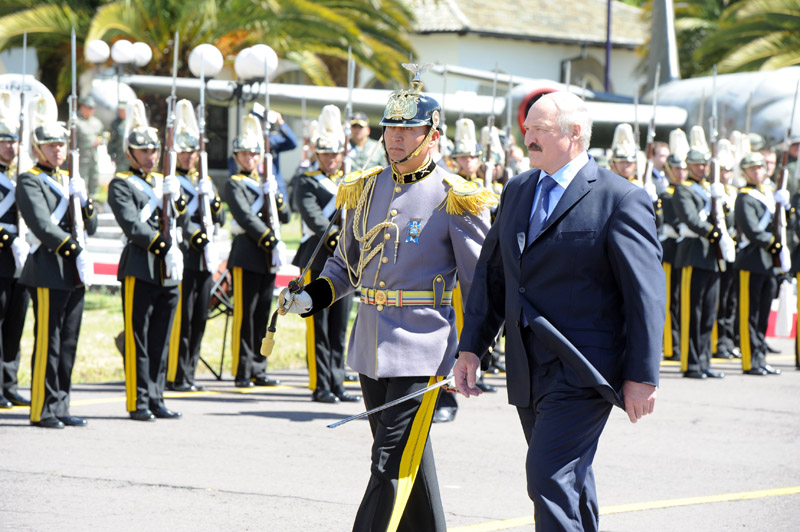 An important aspect of ​​foreign policy of the Republic of Belarus in this region is the extension of comprehensive cooperation with Venezuela, where the bilateral relations were significantly consolidated and expanded within a short period of time. Joint projects in the sphere of oil production, petroleum chemistry, seismography and seismic equipment, gasification, architecture and construction, industry, agriculture and food are being implemented here. The construction of MAZ and MTZ assembling plants, as well as the construction of the plant on the production of construction materials, which will be the largest of its kind in South America, has been finished.

The strategic cooperation between Belarus and Cuba is also steadily growing. The interstate dialogue with Cuba is given a powerful political impetus, bilateral cooperation on the international arena within the framework of the UN, the Non-Aligned Movement and other international organizations has been activated. Active work is being carried out to consolidate the mutually beneficial partnership in the economic sphere.

The extension of interstate cooperation with Brazil corresponds to the strategic interests of Belarus. There are objective preconditions for further expansion of bilateral cooperation of the two countries in trade and economic, scientific and technical and other spheres. Brazil has traditionally been one of the leading trade partners of Belarus in Latin America.

Diversified interaction of Belarus with Bolivia, Colombia, Mexico, Nicaragua, Peru, Ecuador and other countries of the region is also consolidating.

In the long view the main foreign policy efforts of Belarus in Latin America will be aimed at further consolidation of the diverse relations with the countries of the region, the expansion of the political dialogue, the consolidation of the contract and legal base, the promotion of the economic interests of Belarus, including through the creation of joint ventures, the opening of a distribution network and representations, the organization of exchange of visits of business circles.

Full-fledged cooperation with the United States of America in all spheres corresponds to the national interests of Belarus. The Belarusian party stands for the development of bilateral interaction with the USA based on the principles of mutual respect and equitable partnership.

The United States remain among the leading investors of Belarus and rank 6th in the number of created joint and foreign ventures: 282 enterprises registered as of January 1, 2012.