In 1945 Belarus joined the ranks of founders of the United Nations Organization. The Republic has always been among the countries which resolutely fought to preserve the key role of the UN in maintaining international peace and security and addressing other pressing problems. 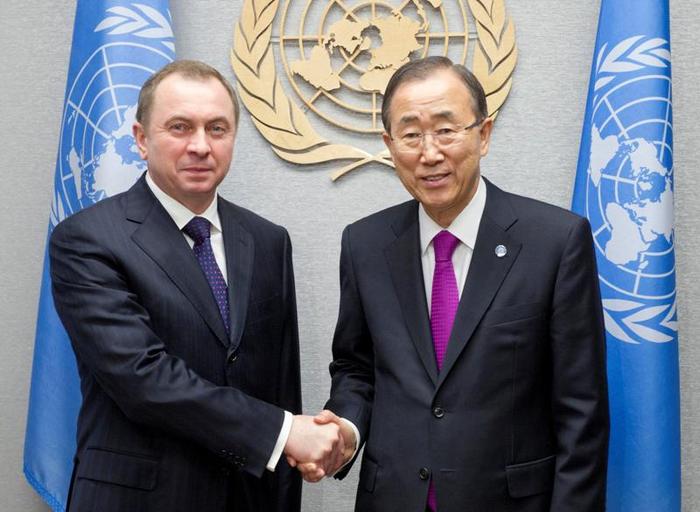 The evidence of the high international authority of Belarus was the election of the country in 2012 to a number of elected bodies of the UN system. Thus, Belarus became part of the Commission on the Status of Women for the period of 2013-2017, the Commission for Crime Prevention and Criminal Justice for the years 2013-2015, the Committee for Economic, Social and Cultural Rights for the years 2013-2016.

Moreover, the country is a member of the Economic and Social Council (ECOSOC) — one of the main bodies for the coordination of the economic and social activity of the United Nations Organization and its specialized facilities and institutions.

The implementation of projects of international technical assistance worth a total of USD 490 million is planned in Belarus through specialized facilities, funds and programs of the UN system in 2011 — 2015 years alone. And this is without lending programs on the part of the International Monetary Fund.

Belarus is the co-founder of the large regional organization of the Commonwealth of Independent States (CIS), which includes 11 countries of the former Soviet Union. The headquarters (Executive Committee) of this organization is located in Minsk. Since March 1994 CIS has the status of a UN observer. 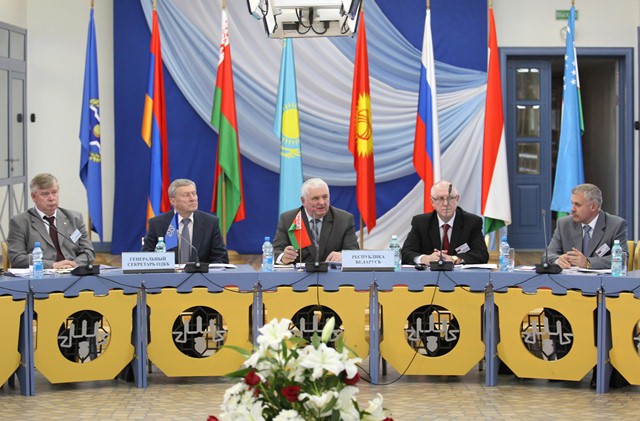 An important component of foreign policy of the Belarusian state is the participation in the regional security processes. First of all, this refers to the membership of Belarus in the Collective Security Treaty Organization (CSTO), which, in addition to our country, includes Armenia, Kazakhstan, Kyrgyzstan, Russia, Tajikistan and Uzbekistan. Belarus considers CSTO an organization that is able to ensure protection of national interests of its member states.

In December 2010, the Republic of Belarus assumed the chairmanship in CSTO. In this quality, our country put forward the initiatives aimed at further increase of the efficiency of the organization, the improvement of the governance mechanism of its functioning and the development of constructive interaction between member states on the international arena.

The cooperation of Belarus with NATO within the framework of existing mechanisms of the Euro-Atlantic Partnership Council (EAPC) and the program “Partnership for Peace” (PFP) is aimed at the development of a constructive dialogue in order to strengthen European and international security.

Since 1992, Belarus has been the member of the Organization for Security and Cooperation in Europe (OSCE) and is actively participating in the elaboration of the most important OSCE documents and decisions by contributing to the development of the pan-European dialogue on issues of security.

Belarus is a member of the Non-Aligned Movement. Together with its partners in the Movement, Belarus stands against the practice of using double standards in international politics, stands for the construction of fair international economic order, the effective integration of developing countries and countries with economies in transition into the world economy, confirms the faith in the uniqueness and diversity of ways of progressive socio-economic and political development of humanity.

In April 2010, the Republic of Belarus acquired the status of a dialogue partner of the Shanghai Cooperation Organization (SCO), which provides the opportunity to join the SCO activity in a wide range of aspects, including the consolidation of regional security, the activation of trade and economic, credit and investment and banking cooperation, the effective development of the transit potential, education and others.

In 2011, Belarus submitted a formal request to receive the status of an observer in the Organization of Islamic Cooperation (OIC), which will allow productively interacting with this powerful and representative international organization.

Integration of Belarus into the world economy directly depends on the interaction with various international organizations, particularly with the International Monetary Fund (IMF), the World Bank Group and the European Bank for Reconstruction and Development (EBRD).

In recent years the Belarusian state managed to receive the revision of its traditional approaches and significant extension of ties by the Bretton Woods institutions.

The implementation of the IMF standby program for the Republic of Belarus with a total amount of about USD 3,5 billion has finished. The International Bank for Reconstruction and Development provided a loan for development worth USD 200 million. New joint projects, including projects on increasing the energy efficiency, the development of infrastructure objects in the social sphere, increasing the quality of water supply and solid waste management, the development of the road infrastructure, the rehabilitation of areas affected by the Chernobyl disaster and a number of other aspects are in the development stage.

Cooperation with two other institutions which enter the World Bank Group — the International Finance Corporation (IFC) and the Multilateral Investment Guarantee Agency (MIGA) — is developing.

The total volume of investments of the IFC in the economy of the country, including projects in banking, manufacturing, agro-industrial spheres, as well as in the service sector, amounted to USD 316 million as of June 30, 2011. A number of programs of counseling assistance of IFC to the Republic of Belarus on the development of the private sector, which is aimed at the improvement of business regulation and the promotion of attracting foreign investments, as well as the improvement of the food products security system, are being successfully implemented.

Over the membership period in EBRD Belarus received loans for the development of telecommunications, the modernization of the Orsha TPP, the reconstruction of the M1/E3O road in the segment Brest-Minsk-Russian border, the development of small and medium business loan schemes, mortgage lending, export guarantees.

Cooperation with economic organizations of the UN system – the UN Economic Commission for Europe (UNECE), the UN Conference on Trade and Development (UNCTAD), the United Nations Industrial Development Organization (UNIDO) and others — is developing actively.

Considerable efforts of the UNECE are aimed at the unification and standardization of the European legislation in the sphere of transport, trade, energy, ecology and a number of other spheres. Over the period of membership in the UNECE (Belarus has been a member since the creation of the organization in 1947), the country acceded to dozens of international treaties, conventions, protocols on a wide range of economic relations.

Cooperation with UNCTAD is developing rather dynamically. It is focused on solving the classical economic problems: the development of trade and attraction of investments, the improvement of competitive environment and reforming of the tax legislation.

Cooperation of the Republic of Belarus with UNIDO continues. Within the framework of the project “Support of industrial integration of EurAsEC member states”, it is planned to create the UNIDO Center of International Industrial Cooperation in the Republic of Belarus. Collaboration with UNIDO in the sphere of energy efficiency, including in the context of the launch of the “Green Industrial Platform” in June 2012 and the preparation for the implementation of a number of projects in the line of Eastern Partnership and CIS, is promising.

Belarus is an acknowledged leader on the international arena in the sphere of counter-trafficking in persons. In 2005, in the UN General Assembly Belarus put forward the initiative of the formation of global partnership to combat this destructive occurrence and since then it has been actively promoting the idea of ​​activation of the efforts of the international community on assuming agreed measures to prevent and control human trafficking. Over the past several years significant progress has been achieved in this sphere. In July 2010, the UN General Assembly unanimously adopted the Global Plan of UN Actions to Combat Trafficking in Persons, which became the first UN document in history which brought together all those interested in combating human trafficking. According to the Global Plan a voluntary trust fund for the protection of victims of trafficking in persons, especially women and children, was established in 2011. Belarus, by the decision of the President of the Republic of Belarus Alexander Lukashenko, was among the first to make a voluntary contribution to the fund.

Belarus is the Coordinator of the Group of Friends, united in combating trafficking in persons, which includes 21 UN member states and represents all regions of the world.

Belarus, as one of the founders of the UN, is a participant of most of the international human rights instruments and aspires to fully comply with its international obligations in this sphere.

In May 2010 Belarus has successfully passed the Universal Periodical Review (UPR) — an ongoing mechanism of the main UN human rights agency — the UN Human Rights Council, created for the purpose of systematic and comprehensive analysis of the situation in the sphere of human rights in all UN member states.

Interactive discussion within the framework of the UPR of Belarus demonstrated high interest in the experience of Belarus in the sphere of the whole complex of human rights. Over 30 states, representing all regions of the world, clearly and unequivocally approved the policy of the Belarusian state on the motivation and protection of human rights.

UN member states highly appreciated the success of Belarus in the sphere of providing social and economic rights, including the right to education, health protection, social protection, gender equality, state support of the family, motivation of children’s rights.

On the international arena Belarus implements a multifaceted foreign policy that best corresponds to the goals of national development.