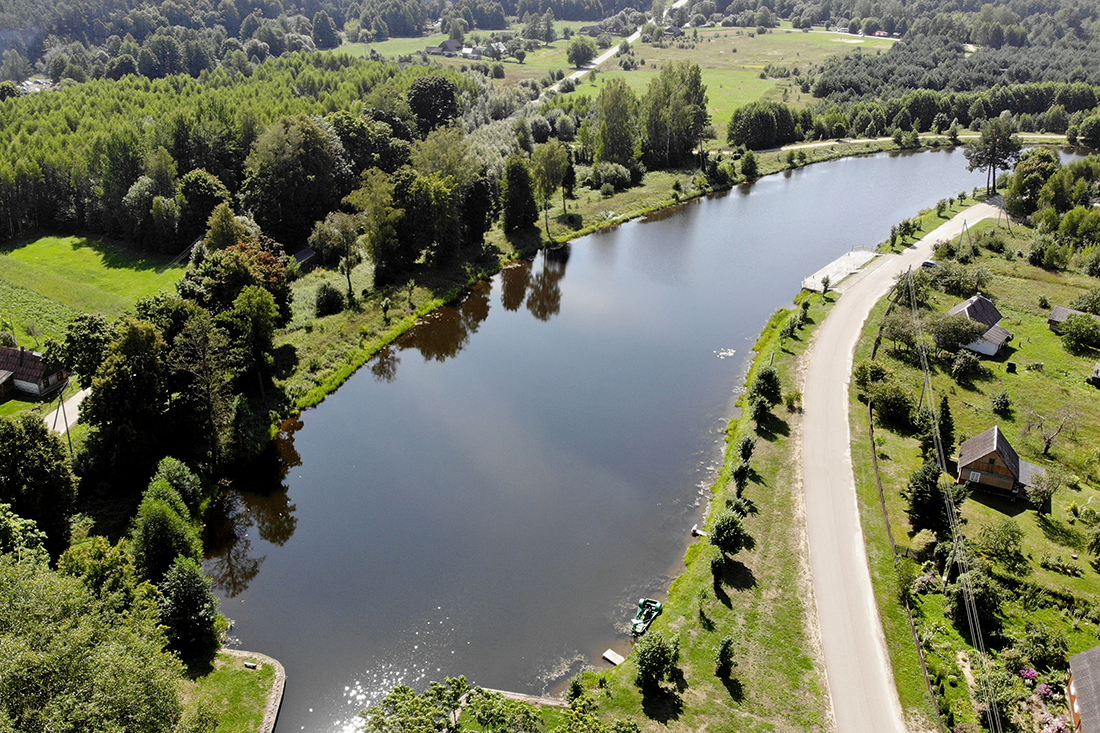 The Augustow Canal is an engineering masterpiece of the 19th century, an artificial waterway connecting the Baltic Sea and the Black Sea. It is one of the world’s most remarkable canals alongside with the Gota Canal in Sweden and the Caledonian Canal in Great Britain. Here you will see unique hydro-technical installations, will be able to have a steamboat voyage or go kayaking amidst picturesque and pristine landscapes. The canal is located in the Augustow Primeval Forest (Augustow Pushcha) which is called “Europe’s green lungs”.
Old Castle and New Castle in Grodno 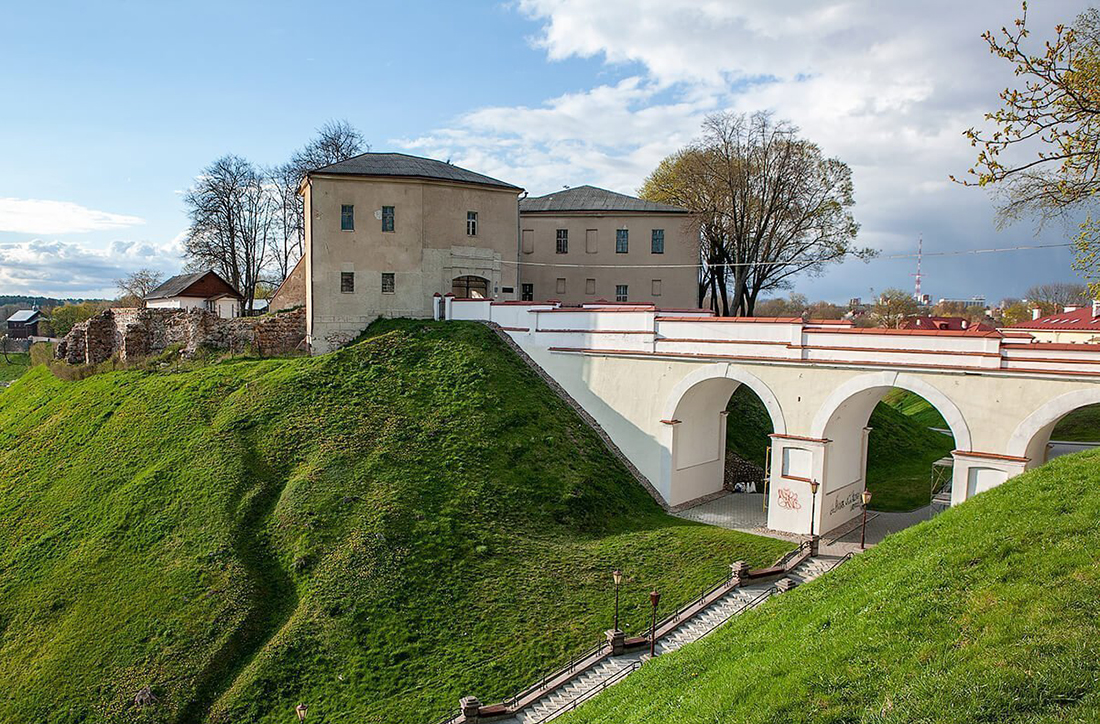 Grodno is the only Belarusian city which preserved two royal castles – the Old and the New Castles and whole ensembles of different architectural styles — from Baroque to constructivism. The Old Castle was built at the end of the 14th – beginning of the 15th century by the order of Duke Vytautas. The thickness of the castle walls reaches 3 meters, the length is about 300 meters. In the second half of the 16th century the Old Castle became the residence of King Stefan Bathory. During the Northern War (1700-1721) the castle was severely damaged and it was decided to build a new castle. In 1925 a historical and archaeological museum opened in the premises of the Old Castle. On the bank of Neman, near the Old Castle is the Church of Boris and Gleb (Kolozhskaya Church) of the 12th century – it is one of the oldest shrines in Belarus. The historic center of the city is the Sovetskaya Square, which partly preserved the West European design of the 15-17th centuries. The Cathedral of Saint Francisk Ksaveria, one of the most magnificent monuments of Baroque in Belarus, is located here. 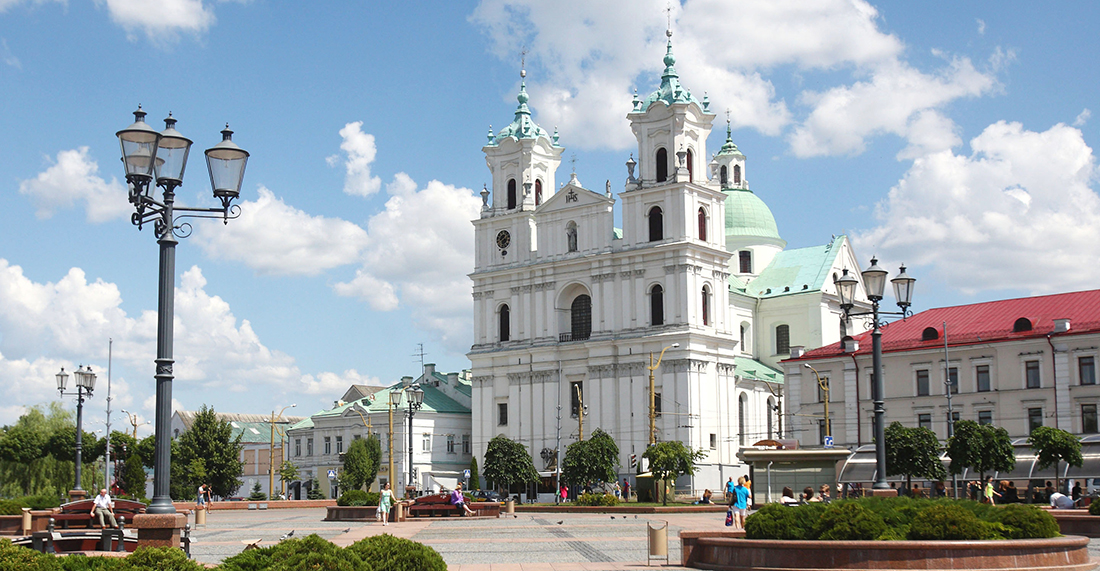 This magnificent cathedral is certainly a landmark of the ancient city. Its dedication ceremony was attended by King August II and Russian Emperor Peter I in 1705. The cathedral was part of the compound that included a monastery and Belarus’ first pharmacy (the pharmacy museum now) and occupied an entire neighborhood. The cathedral was believed to be the most beautiful religious building in Rzeczpospolita. The major sanctity of the cathedral is the wonder-working Icon of the Congregational Mother of God (Patron of Students). It is a replica of the Icon of Our Lady of the Snow from Santa Maria Maggiore Basilica. It was given to Grodno in 1664. The cathedral is famous for its splendid wooden alter decorated wtih carved figures of apostles and saints.
Kolozha Church

The Kolozha Church is an extraordinary specimen of the 12th-century stone architecture and is one of the oldest working churches in Belarus. In line with a legend, the name “Kolozha” derives from the Kolozhan district in Grodno where the church was built. The word “kolozhan” meant a place overflowing with spring wells. The church was nominated for the UNESCO World Heritage List. This Christian halidom is famous for its decor and acoustics. Its facade and walls are decorated with installations made from stones and majolica slabs in the form of crosses. The tremendous acoustics in the church is achieved thanks to the colorful inbuilt resonators.
Lida Castle 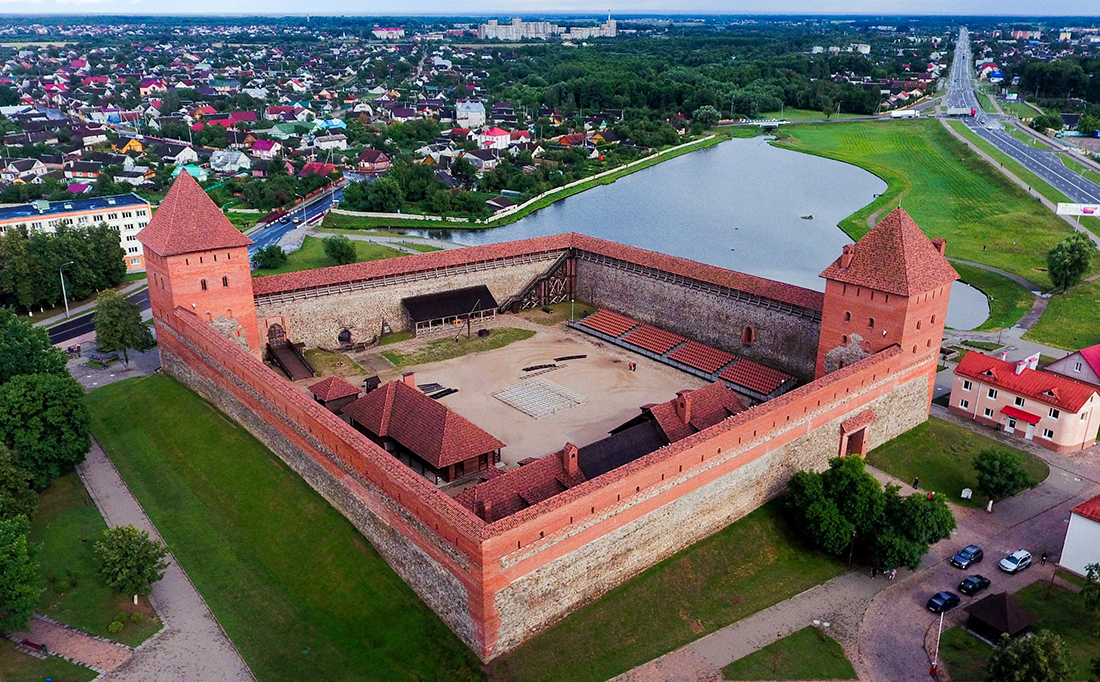 One of the oldest Belarusian towns is Lida, where you can see the Castel, founded in 1323 by the order of the Grand Duke Gediminas at the confluence of the rivers Lideyka and Kamenka. This castle was part of the line of defense Novogrudok — Krevo — Medniki (Medininkai) — Troki (Trakai), built to protect the lands of the Grand Duchy of Lithuania from the raids of the crusaders and was a witness to many important historical events. For over a month wedding balls in honor of the wedding of King Jagiello and young Sofia Golshanskaya rumbled in the LidaCastle. The castle survived many sieges and assaults, including the attacks of the Crimean Tatars, crusaders, and during the Northern War — of the Swedes who blew up its towers. In 1794 there was a battle between the rebels of Tadeusz Kosciuszko and the tsarist troops on the territory of the castle. In the 1920’s Polish restorers performed conservation works at the castle. In the 1980’s BSSR restorers restored the walls and the north-eastern tower of the castle. Restoration works continue in the castle. The international festival of medieval culture “The Gediminas Castle” is held in the Castle. 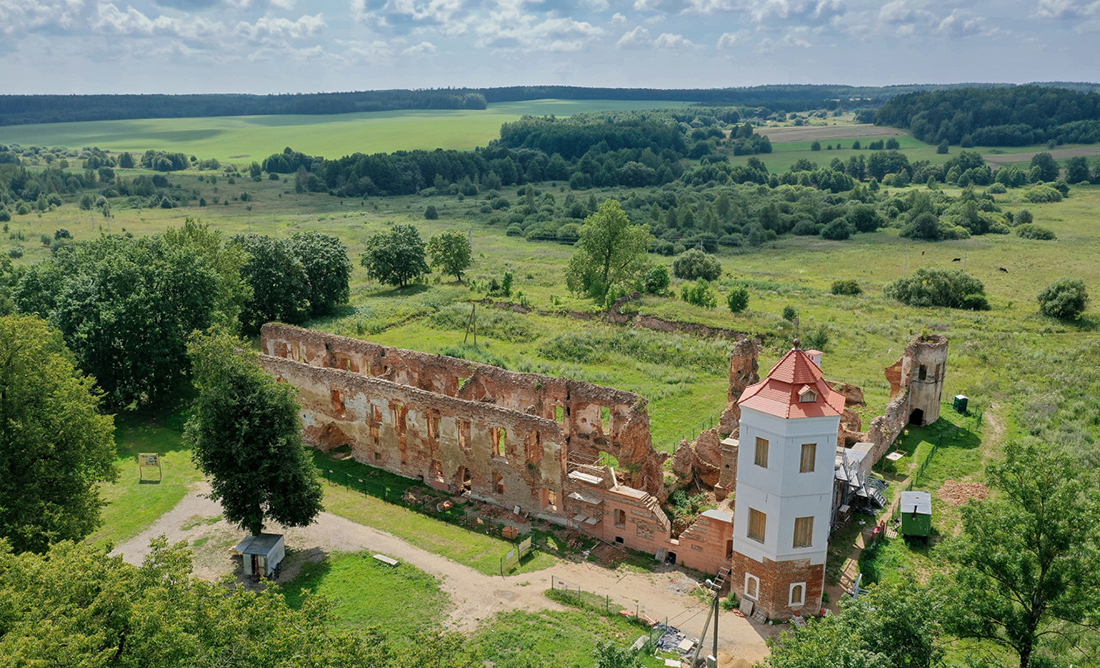 The Golshany Castle inspired the famous Belarusian writer Vladimir Korotkevich to create his famous novel “The Black Castle Olshansky”. Some time ago this castle, built for the junior office clerk of the Grand Duchy of Lithuania Pavel Stefan Sapieha in the Renaissance and Mannerism tradition, was considered one of the finest in the Polish-LithuanianCommonwealth. In the 17th century the castle was passed to other owners, and subsequently it frequently changed owners. During the Northern War in the beginning of the 18th century it was severely damaged, but remained inhabited until 1939. During the Soviet era new buildings were built in the village from the bricks of the castle. The ruins of the castle have the status of a state monument.

The Krevsky Castle was constructed between 1338 and 1345 by the order of the Grand Duke of Lithuania Olgerd. In 1385, the Kreva Union Act — a treaty on the alliance of the Grand Duchy of Lithuania and the Kingdom of Poland — was signed in the castle. This historic document influenced the fate of all European nations. The Krevsky Castle is the participant and witness of World War I. A protruding iron carcass and concrete slabs can still be seen in one of the destroyed towers of the castle. During the warfare the castle was in the hands of the Germans. To get to the enemy, the Russian artillery was forced to shoot the castle. The Russian military offensive operation in this front sector was headed by the commander of the Western Front, the lieutenant general Denikin, the future famous head of the White Guard. 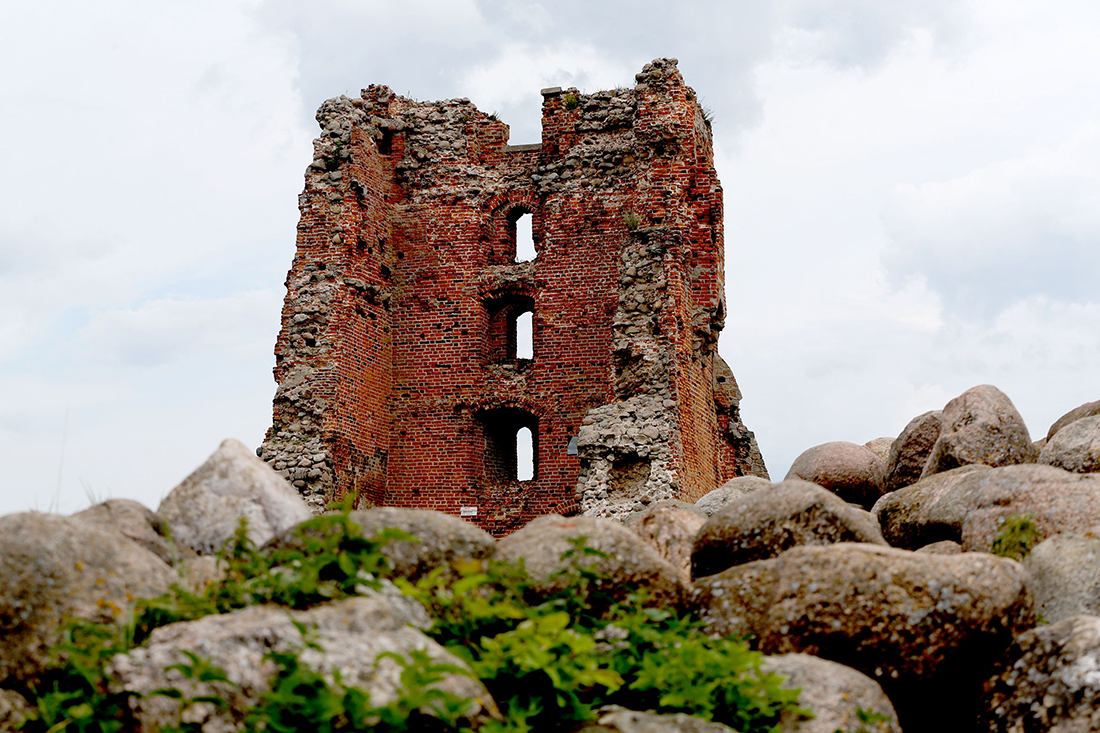 Novogrudok is one of the most ancient Belarusian towns. The first written mention of it in chronicles was made in 1044 and is associated with the crusade of the Grand Duke Yaroslav the Wise to Lithuania. In the 13th century Novogrudok became the capital of the Grand Duchy of Lithuania. After the capital was moved to Vilna (in 1323), Novogrudok remained an essential defensive outpost of the Grand Duchy of Lithuania. The ancient center of Novogrudok is the castle. At the beginning of the 11th century wooden fortifications appeared in this place. The first stone tower appeared at the end of the 14th century – the Scale which remained in ruins until today. By the beginning of the 16th century the Novogrudok Castle had seven stone towers and was the most powerful in the Grand Duchy of Lithuania. It repeatedly withstood the siege of crusaders, the Mongol-Tatars and Galicia-Volyn dukes. During the Northern War (1700-1721) the castle buildings were destroyed. The silhouette of the undamaged Scale tower is one of the recognizable symbols of Belarus.

Since 2000 festivals of medieval culture and tilting matches have been held near the castle in Novogrudok.

The Holy Dormition Stavropegic Zhirovichi Monastery in Slonim District is part of Belarus’ national heritage, a place of fascinating history and spiritual strength, and home to the legendary relic – the Zhirovichi Icon of the Mother of God.

The Zhirovichi Icon is known not only as a wonderworking icon but also as a unique piece of art, historical and cultural phenomenon. It is respected both by Orthodox and Catholic believers and is on the list of the 100 most valued Orthodox icons in the world. This is the smallest of the most respected icons of the Mother of God, it is an oval piece of jasper (5.6x4.4cm) with a relief image of the Mother of God holding the infant Jesus. The icon was found in vast forests belonging to treasurer of the Grand Duchy of Lithuania, boyar Soltan near Zhirovichi in the spring of 1470. It is closely connected with the history of the Holy Dormition Monastery. The monastery is one of the largest architectural ensembles of the 17th — 18th centuries in Belarus. It has never closed throughout its history and is a major attraction for tourists and pilgrims.

The Mir Castle is a real diamond in the castle crown of Belarus. The residence of the famous Radziwills family, which is included in the UNESCO World Heritage list is an outstanding specimen of defense architecture of the 16th-17th centuries. Apart from an unassailable citadel which houses a museum and a hotel, the Mir Castle Complex includes an Italian Renaissance garden, an English park, a pond and a chapel.